With the Sailor 1911 being such a popular premium fountain pen, we constantly see people from the fountain pen community asking questions based around a Sailor 1911 standard vs large comparison. Although both variants of the 1911 are extremely similar, they do have some small subtle differences that can actually make a surprising difference for some people depending on their needs and goals for their pen.

Please keep in mind that all of the pens in the Sailor 1911 range are excellent, high-quality, and have an outstanding reputation amongst the fountain pen community that is well deserved. Although many people will be able to go with either the standard or large variant of the pen and have a great writing experience, we have our comparison table below with a short breakdown going over the main differences. 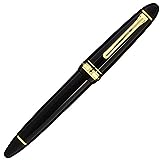 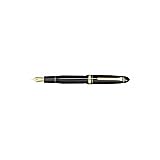 As you can see in the comparison table above, the main differences between the standard and large variants of the Sailor 1911 if their size and the gold carat rating of their nibs. The Sailor 1911 Standard is the more popular option from the range as it is a better fit for more people. It is considered the unisex variant in the range as it is better suited to smaller hands and thus has the larger customer base. That said though, the 14 carat gold nib on the standard can put some people off but we will touch on that more later in the article.

The Sailor 1911 Large is a larger pen with a slightly higher weight and is better suited to larger hands. The 21 carat gold nib on the large variant of the 1911 does tend to be preferred by many people within the fountain pen community making the large variant the default choice for them. That said though, although if you do not have larger hands then upgrading to the large variant for the higher carat rating of the nib can actually detract from your writing experience due to the larger size and weight of the pen.

We will now be taking a more in-depth look at some of the specific features of the Sailor 1911 and looking at the advantages and disadvantages for both for specific situations. We know that some of our readers will want to know as much as possible about the differences between the Sailor 1911 standard and large variants prior to making a purchase so we always like to do more of a deep dive rather than just the comparison table.

Both the standard and large variants of the Sailor 1911 come in the Extra Fine, Fine, Medium, Broad nib sizes meaning that they should be able to meet the requirements of the majority of people. Although there are some limited edition variants of the large Sailor 1911 that come with a double broad nib, these are rare as fountain pen collectors tend to pre-order them as soon as they are announced.

The Sailor 1911 is also available with the Sailor flex nib technology allowing you to change the nib width of the pen by apply more pressure when writing. For example, if you go with either the standard or large variant of the Sailor 1911 with the flex nib in medium, you are able to apply more pressure when writing to get a broad font size. Although the flex nib system is a little controversial with some people, once the user gets used to it, it does tend to win them over.

As we touched on above, the Sailor 1911 standard has a 14 carat gold nib where as the Sailor 1911 large has a 21 carat gold nib. If you are a more experienced luxury fountain pen user then you may be able to tell the difference in the writing experience between the 14 carat nib and the 21 carat nib but we would imagine that most of our readers will not be able to feel much of a difference between using the two.

A large number of people looking for a luxury fountain pen simply see the higher gold carat rating on the nib of the Sailor 1911 Large and choose it as their default option even though it has a higher price tag. Although the higher carat rating in the nib does offer a slightly better writing experience with the additional spring in the nib keeping to your natural writing pattern a little better, this should not be a major factor in choosing between the Sailor 1911 standard or large.

Unfortunately, neither the standard or large Sailor 1911 offers replacement nibs as the section of the pens mount directly to the barrel. Although there are some tutorials on YouTube of how you are able to replace the nib and the section on your Sailor 1911, we would not recommend that you try them as they pen was not designed for this and trying to replace the nib may end up causing damage to the pen barrel.

Also, please keep in mind that Sailor are a Japanese fountain pen brand and although their nib sizes are makes as Extra Fine, Fine, Medium, and Broad, they do tend to be a size smaller than their western counterparts. If you are used to using a fountain pen from a western brand and are looking to keep the same nib size then we would recommend that you go up a size on the nib. For example, a Japanese medium nib is closer to a western fine nib rather than a western medium nib size.

Both the normal Sailor 1911 standard and Sailor 1911 large use a cartridge convertor system but the Sailor 1911 Realo is an additional variant of the large 1911 that uses a piston filler system. With so many people from the fountain pen community being a fan of a piston filler system for their ink storage and delivery, this alone may make the Sailor 1911 large your pen of choice provided you go with the Realo variant. Please note that at the time of writing, there is no Realo version of the standard 1911 available and we doubt that one will go into production.

When it coms to colors and trims, Sailor have implemented a different system to most other fountain pen brands. They have their standard 1911 range of colors available but they also have a number of regional specific variants too that fountain pen collectors often pay high premiums for. For example, there are color schemes of the Sailor 1911 available in North America that are not available in Europe and there are color schemes in Europe that are not available in Asia and so on.

The cap of the Sailor 1911 is made from the same High-Quality PMMA Resin as the barrel of the pen ensuring that the cap is just as robust as the rest of the pen. It comes in a matching color as the barrel with the matching trim too. The clip on the Sailor 1911 is ideal for a premium price point fountain pen as it is rigid helping to keep your pen attached to whatever you clip it to preventing it from going missing.

Both the standard and large variants of the Sailor 1911 use the twist off cap system that we feel is better for fountain pens at this price point as it helps to keep the barrel and pen attached to each other to prevent the barrel from going missing. Although some brands do offer a push lock system on their caps, we really are not fans of it as over the years, the push lock systems tend to degrade increasing the chance of the barrel coming free from the cap and going missing. Thankfully though, Sailor use the twist off system in their 1911 to prevent this from becoming and issue.

Although most of the luxury pen brands do try to do something special with the finial on their their pen caps, Sailor have decided to keep all of their pens to their preferred minimalist design. Although this can make the Sailor 1911 look a little plain when compared to some competing fountain pen brands on the market, we prefer premium fountain pens to offer the best performance, functionality, and writing experience possible rather than to look pretty.

The Ink Reservoir Of The Sailor 1911

The sailor ink cartridges that the 1911 uses for its normal standard and large variants come with an ink capacity of 1.25ml putting it at the middle of the pack again when it comes to ink capacity. With the normal variants of the 1911 that use the cartridge, this is not too much of a drawback though as the cartridges are small and light making it easy to carry spares with you as required to prevent you from running out of ink.

That brings our ultimate Sailor 1911 standard vs large comparison article to a close. We hope that you have found it helpful and as we have touched on throughout the article, most people do tend to go with the Sailor 1911 Standard but the Sailor 1911 Large is still probably the better option if you have larger hands and the budget for it. If you want to use a piston filler for your Sailor 1911 then the Sailor 1911 Realo is the only option for you due to all other 1911’s using cartridge convertors.

Pickypens.com is part of the Amazon Services LLC Associates Program! As a member of this affiliate advertising program we are able to earn advertising fees (commissions) by linking to Amazon and other affiliate merchants. Full details are in our privacy policy linked in our menu above.